The Goal by Eliyahu M. Goldratt 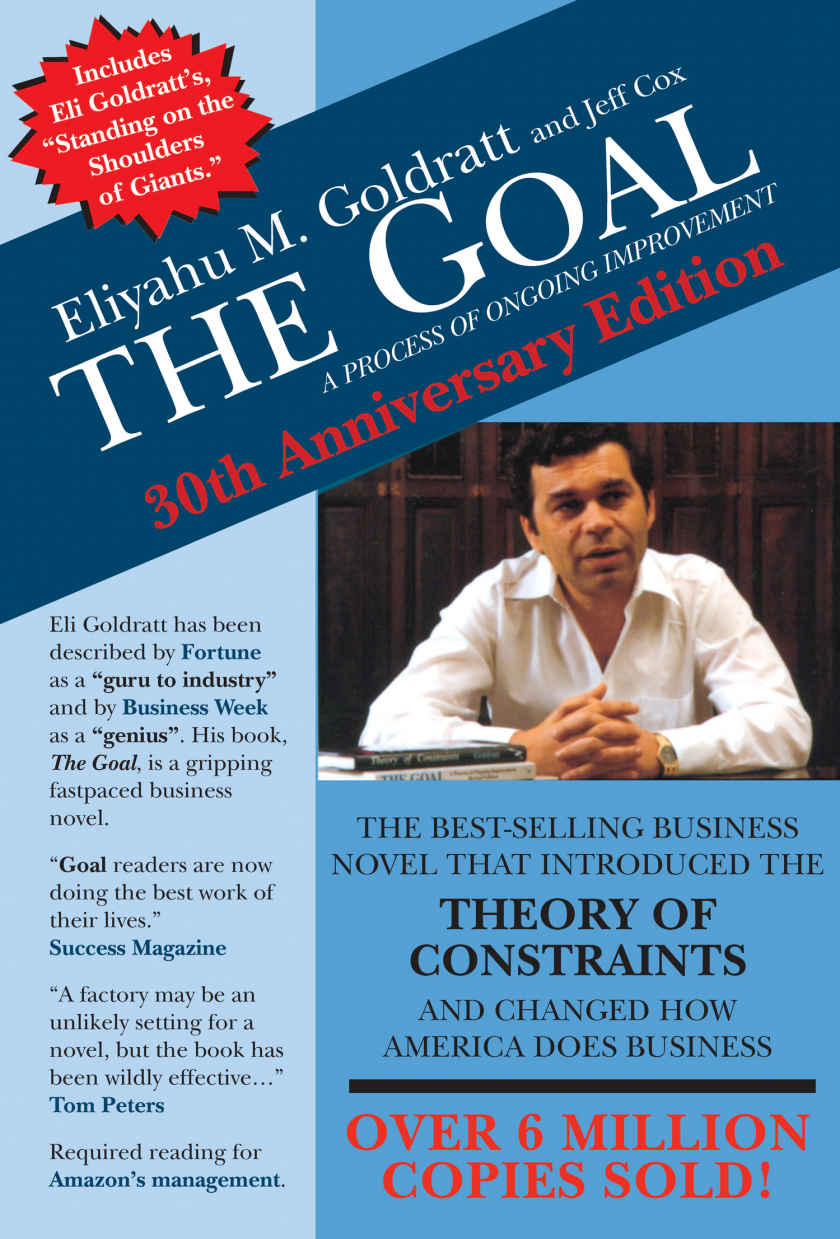 The Goal is a business novel that walks you through a plant manager's discovery of a process of ongoing improvement. The book is written in a clever way that forces you, the reader, to think about the implications of the manager's actions and draw parallels to your own systems.

What is the goal?

The main character in the novel is a factory manager named Rogo. His factory is failing and his boss gives him three months to turn it around.

Without much time and with no ideas of where to start, Rogo turns to his old physics teacher for help. The physics teacher, Jonah, begins by asking a basic question, "What is the goal of your factory?"

After taking a step back and thinking about the big picture, Rogo determined that the goal of the factory was to make money.

Once Rogo realized this, it became obvious that many of the things they were doing on a day to day basis were actually costing money, which was counter-productive.

The word "throughput" was used to represent the rate at which the process generates money through sales. Higher throughput is good.

By measuring throughput and taking a birds-eye view of the entire system, Rogo was able to see a bottleneck. Parts needed to complete a sale weren't passing through one of his machines fast enough.

One way the factory was measuring success was through a metric called "efficiencies," which essentially boiled down to the belief that no resource should ever be idle. Every person and machine should be working at all times.

Because idle workers and machines were seen as a bad thing by the "efficiencies" measurement, floor managers kept unnecessary processes running. This led to a huge overstock of inventory, which clogged up the rest of the factory's flow and ended up costing more in the long run.

Rogo realized that excess inventory wasn't an asset, it was a liability. And this lesson, re-emphasized by Jonah, also showed him that idle time isn't always bad. In fact, it's a necessary part of a well-balanced system.

Where is the constraint?

Efficiencies, for example, were measured to make sure that every employee and machine was constantly being worked. But as we saw in the previous section, this measurement lowered throughput and hurt the entire system because the rest of the processes couldn't keep up.

Rogo determined that there are three main measurements that all impact the bottom line:

Throughput should be high. Inventory and operational expense should be low.

Earlier in the novel, it was obvious that a particular machine was acting as a bottleneck for throughput. Parts had to be processed by this particular machine before they could be fitted to the final product, the machine could only process so many parts per hour.

By finding the constraint, they were able to optimize their entire system around that particular bottleneck, and all three measurements moved in the right direction.

But by optimizing the system around that bottleneck, other bottlenecks started popping up all over the place. When there was more than one constraint, how could they find the biggest ones to focus on next?

The water and rocks analogy works well if there are multiple constraints. In this example, pretend like there is a river flowing (throughput), but there are rocks that are disrupting the flow (constraints).

To discover the constraints, simply lower the water level by reducing the flow. The rocks that jut out highest are the biggest constraints.

In his factory, Rogo "lowered the water level" by cutting his resource supply. It became painfully obvious which areas were the constraints almost immediately.

When there wasn't excess supply, the missing parts were increasingly important, and knowing which pieces were most important pointed them toward the new bottlenecks.

There are dependent events, like when one machine has to wait for parts from another. There are also statistical fluctuations, like when a company gets more orders one month than the next.

Balancing dependent events and statistical fluctuations is challenging, but it's made easier by articulating the particular problems of your system and designing processes to handle them.

One mistake many companies make is losing track of the goal. They get caught up trying to optimize cogs instead of the machine. For more information about this particular issue, I'd recommend looking into the "Local/Global" mental model.

Every resource you have shouldn't be active 100% of the time. That can be counterproductive and lead to excess inventory.

One way to limit excess inventory and make sure that you aren't wasting resources just by forcing them to work even when it's not necessary is by limiting space. Never stock more than the allocated space, even if you have the resources to do so.